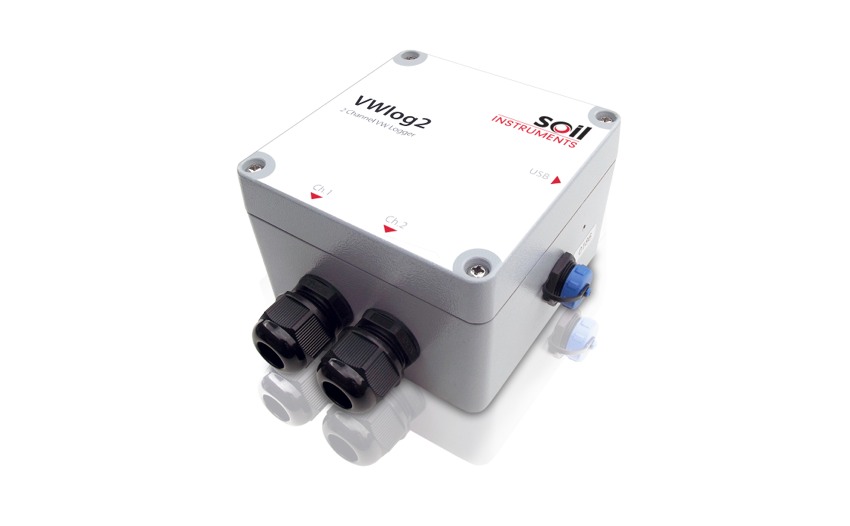 VWlog2 contains a large internal memory of 4MB, enabling storage of up to 50,000 readings per channel. The internal memory operates as a USB mass storage device which is accessible through a mini USB interface, allowing data to be easily transferred to a PC or mobile device via drag-and-drop.

The included VWlog2 software, enables the user to easily setup the logger parameters, such as date and time, sweep frequency range and excitation voltage.

VWlog2 is housed in a waterproof enclosure, providing a rating of IP66 and all electronics are encased in an impervious sealing compound to avoid water damage.

Before going to site, a configuration file is created using the VWlog2 software provided by Soil Instruments.

The included VWlog2 software allows the user to easily create the configuration file, setting up the logger parameters such as date and time, sweep frequency range and excitation voltage.

On site, two Vibrating Wire sensors with optional thermistor temperature sensors are connected to VWlog2. As soon as the batteries are fitted, VWlog2 will start reading and storing data according to the previously specified settings in the configuration file.

The data is saved onto the VWlog2 internal memory in CSV format and is easily retrieved via a mini-USB to USB cable.

Once connected, VWlog2 appears as an external USB drive allowing data to be easily transferred from VWlog2 to a PC or mobile device via drag-and-drop, using the same action as a file on the PC’s hard drive.

The VWlog2 reads the Vibrating Wire sensors using ‘Zero Crossing’ which is a signal processing method that calculates the frequency of a waveform by detecting and counting the number of times the signal crosses zero, or changes sign.

VWlog2 can be used to read Vibrating Wire (VW) sensors for geotechnical and structural monitoring.