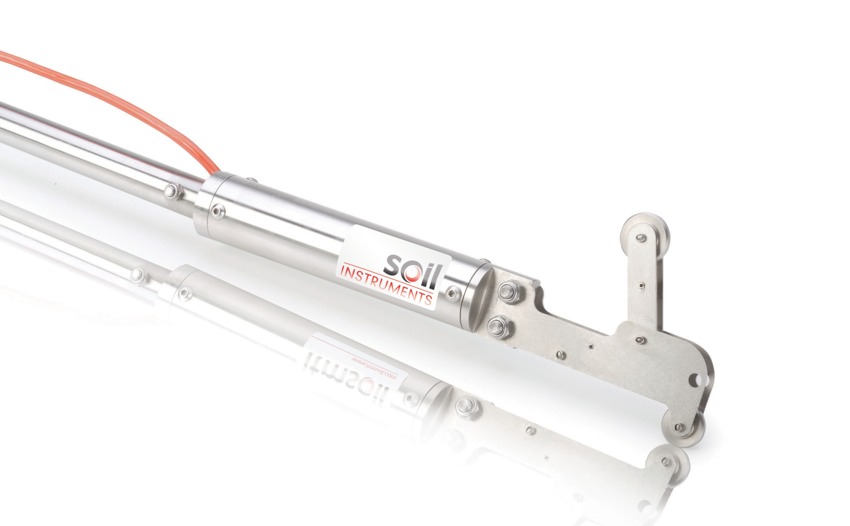 The In-Place Inclinometer (IPI) is used to measure lateral displacement within a borehole.

Most commonly, the IPI is used in a system where multiple IPIs are installed at varying depths. In this manner the profile of the displacement can be monitored.

The IPI itself consists of one or two (uniaxial or biaxial) MEMS tilt sensors mounted in a stainless steel housing. Each sensor incorporates an on-board microprocessor which performs an automatic temperature compensation of the tilt (g) data.

The sensor itself is a small discrete device which measures in g (gravity). The sensors are powered and read by a data logger such as the Campbell Scientific CR1000. Argus software can produce a near real time profile of displacement that is constantly updated.

Multiple IPIs are installed at varying depths, secured using gauge rods connected to the next/previous IPI; the final gauge rod is secured at the top of the borehole using a top support assembly.

Each IPI is connected to a data logger such as a Campbell Scientific CR1000; the datalogger powers the sensors, initiates readings and communicates the data.

Argus monitoring software can also be used to display and monitor the data.

IPI systems measure lateral movement in the ground or in a structure. They are useful for determining the depth, direction, magnitude, and also rate of movement.

For example, they can be used to ascertain the stability of retaining walls by measuring bending and rotation in the retaining wall. They can also reveal ground movement that could affect other buildings. Inclinometer systems can also be used to detect movement in the downstream and upstream side of dams and to define shear zones in the foundations of concrete faced dams.

The measurements of recorded movement can be utilised to check that the deflections are within the design assumptions. Monitoring should be continued to establish any longterm effects after works have finished.

Inclinometer casings can be used in boreholes, embedded in fill material, cast into concrete or attached to structures for the following typical applications: