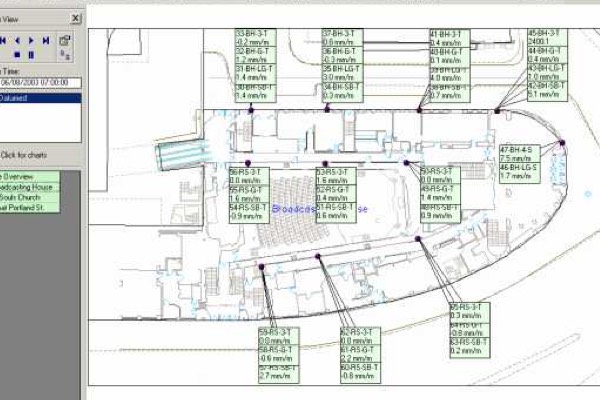 The aim of the new development was to enhance the northern corner of Oxford Street; the building’s positioning is at the crossroads between the commercial centre of Regent Street and Oxford Street, the media and fashion zone of Soho, and the academic environment of the Great Portland Street area.

During the course of the work it was vital to ensure that the resultant ground movement would not adversely affect the surrounding buildings (including the historic All Souls’ Church in Langham Place) nor Broadcasting House itself.

To validate their calculations, extensive monitoring of the structures needed to take place. Soil Instruments supplied tiltmeters, data loggers and I-Site data presentation software to allow data to be transmitted hourly to the client’s engineer’s office. In addition, I-Site was used to constantly check figures received and compare them against pre-determined trigger levels; if these were exceeded alerts would be generated and the relevant people automatically contacted. (152)